Paul had an office in R4 located right in front of the spot where Breivik parked the bomb truck in the Government Quarter. In this letter, written on 26 July 2011, he tells friends and acquaintances that he is safe. The letter is reproduced with Paul's permission. 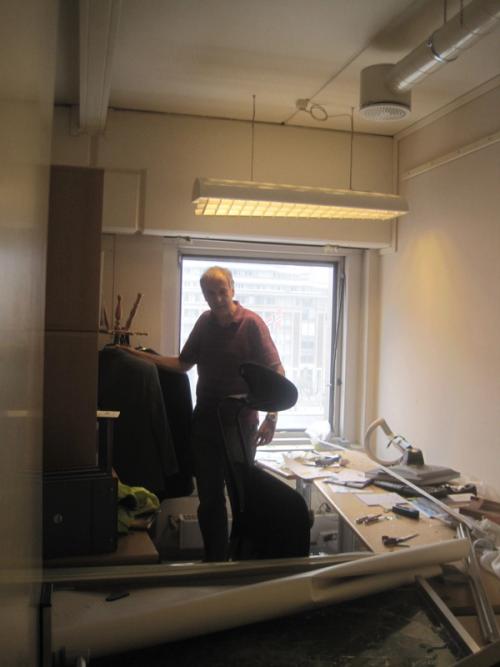 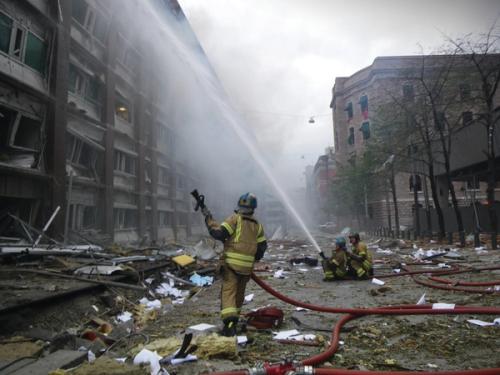 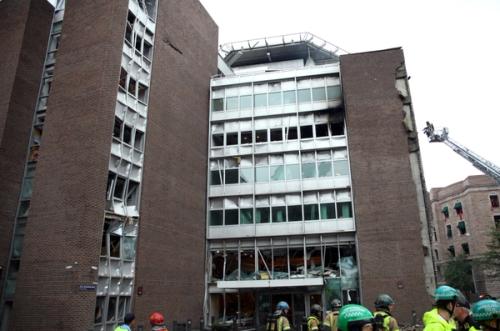 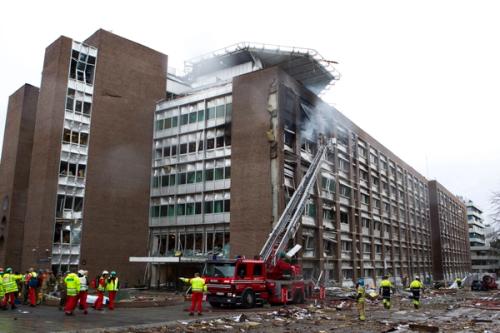 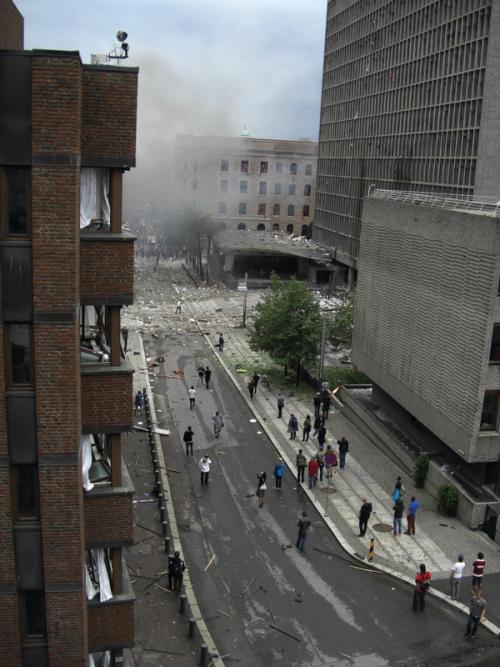 Things are now slowly returning back to normal and all the sympathy that we have received from you all and that Norwegians are receiving from the whole world is very heart warming.

We were actually dangerously close, my children and I. These pictures show my ministry to the left. My children have their summer jobs in the same area and left from a building behind the camera before 3 p.m. The blast happened at 3:26 p.m. I was still at work. My office is on the top floor, a bit to the left of the third lamp post.

Behind me, the window is missing. The blast pushed it into the room. I was sitting at my desk by the window, finishing some e-mails before my summer holidays due to start after that day. Instinctively, I ducked and the whole window flew over me and crashed onto a table in the foreground. A film had been taped to the glass a few years ago and prevented the glass from shattering into small pieces. When the film was installed, I did not dismiss that there could be a danger, and when the blast came, I immediately understood what was happening.

To my own astonishment, I was unharmed. Just some minor cuts on my left arm. Nothing on my head or back.

I got up and looked out of the hole where the window had been, to assess the situation. I thought of the Oklahoma bombing, which was the correct guess. I observed that the source of the blast must have been close to the main entrance, to the left of the top pictures.

Principles I had learned when we lived in Japan in the nineties, on how to react after an earthquake, helped me a lot. I knew that a concrete building, when severely shaken, as long as it doesn’t collapse immediately and there is no major fire, will remain standing. Thereby I knew I should not rush out in a panic but had reasonable time to decide what the best way to get out was. Then came the classical mental reaction: to start with some unimportant small tasks. The stand where I hang my coats, close to the window, had toppled. I dutifully put it back up, shook of the dust from the coats and hang them back. I think this apparently ridiculous reaction is the body’s and the brain’s way to have a slow and careful start after such a shock.

After a short while, I realised I had more important things to do! I saw I had a challenge to to get out through the door, as the shattered window blocked my way. As I was pondering how to solve this, two of my colleagues, who had their offices further to the back of the building, reached my office and one of them took this picture. He was bleeding from his head (looked worse than it actually was), so I told them I would be able to push away the window and asked them to keep going. The window was not too heavy and I easily pushed it down from the table and up to a vertical position. My way out was now unobstructed.

Still aware that I did not need to rush, I took the time to gather my most important belongings, passed by the washroom to wash off the little blood that had been bleeding from my hand and walked towards the main staircase that was not far away. I walked down not too fast, trying to register if there was any smell of smoke or other indication of a danger but there were none. The situation in the staircase felt almost normal and I realised I actually had a choice between going out through the main entrance or continuing to the basement where cars and bicycles were parked. I knew I had to check on my children’s situation as soon as I was out. I also knew that the mobile network could be overloaded in the area and public transport unreliable in such a situation. So I decided to go to the basement and take my bike with which I would be able to get home faster if the mobile phone didn’t work. Thereby I later realized that I was also able to avoid having to see the very tragic scenes outside the main entrance.

I came out safely through the garage entrance on to a street further away. Then I tried my cellphone. I got no contact. So, I just got away on my bike. After five minutes, the phone rang. It was my daughter calling and we could tell each other that we all were safe.

Nobody died inside this building. There were injuries on other floors than mine.

So we were all very lucky! It will take us some time to get back to a really normal situation but now I have my holidays and the children have been given one week’s paid leave, so we will be able to recover and appreciate life.

Love to you all