A brief introduction to how to teach pupils about 22 July: What to include and how we can talk about 22 July. 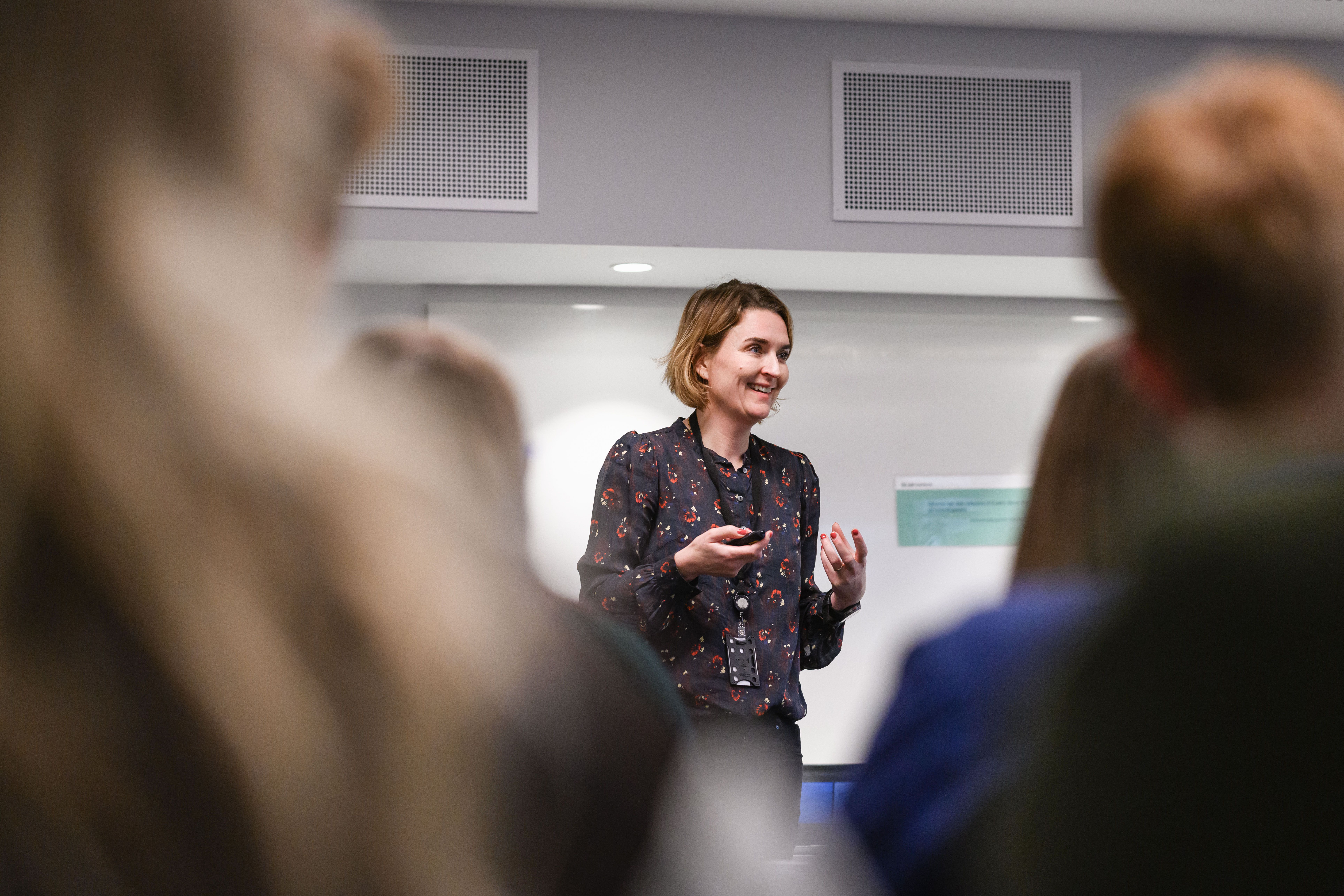 Consider whether you should inform the parents that pupils will be taught about 22 July. This will allow them to prepare for any questions or reactions the pupils might have to what they learn about 22 July. The younger your pupils, the more important it will be to inform their parents.

You and the pupils have different starting points

Prepare yourself for the fact that your group of pupils will have few or no recollections of 22 July. Since the pupils have no memory of what happened, this is likely to influence their emotional relationship to 22 July, which in turn may impact on their reactions, questions and answers. Some will feel that this is a very sad subject to learn about, others will be angry, some will appear not to care, some will joke about it, and some will make provocative statements related to the terrorist’s ideology or the stories of the survivors of the terrorist attack.

Typically, pupils are very direct and detail-oriented in their questions. Most of their reactions will be natural and within acceptable limits. The fact that the pupils do not remember 22 July will give you as a teacher some options, because your pupils will regard 22 July as a historical event. However, it will also require more of you as a teacher, since you will need to have a good understanding of the key aspects of the terror attack.

It will be good to have an overview of the sequence of events, the terrorist’s ideology, aspects of conspiracy theories, the court proceedings/verdict and similar. You will be sure to receive questions about these. It is important to specify that you do not need to know everything. You are primarily a facilitator that will guide the pupils, and together you can search for answers to the pupils' questions. This is also a good opportunity to exercise active criticism of the sources while searching for answers. We have a number of good in‑depth texts that both you and the pupils can make use of. Here is a link to the thematic pages.

What do your pupils know already?

Start by identifying your pupils’ existing knowledge by using questions such as: ‘What have you heard about 22 July?’, ‘What have you heard about why the Labour Party was the target of the attack?’, and ‘Which conspiracy theories have you heard about?’ The pupils cannot be held accountable for the things they have heard, and this gives you an opportunity to clear up misunderstandings and factual errors. The pupils’ answers to these questions should be seen in conjunction with each other in order to help the pupils see the connections between causes and consequences.

All teaching about the terrorist attack of 22 July 2011 must include an introduction to the real story – what happened on 22 July? Most pupils have no personal recollection about 22 July and need to learn about the attacks like they learn about other historical events. ‘Fake news’ and conspiracy theories pose a real and growing threat to democracy, and they are also fundamental to the ideology that motivated the terrorist. The real historical facts must constitute the basis for teaching pupils about 22 July in order to quash any attempts to create doubt about or revise the key facts associated with the sequence of events on 22 July. Be open and clear about how we know what we know about 22 July. Here you can draw on the police investigation, eyewitness statements, the court proceedings, the terrorist’s own statements and documents and the report from the Gjørv Commission from 2012. We have developed a digital timeline that you can use to learn about the real facts. 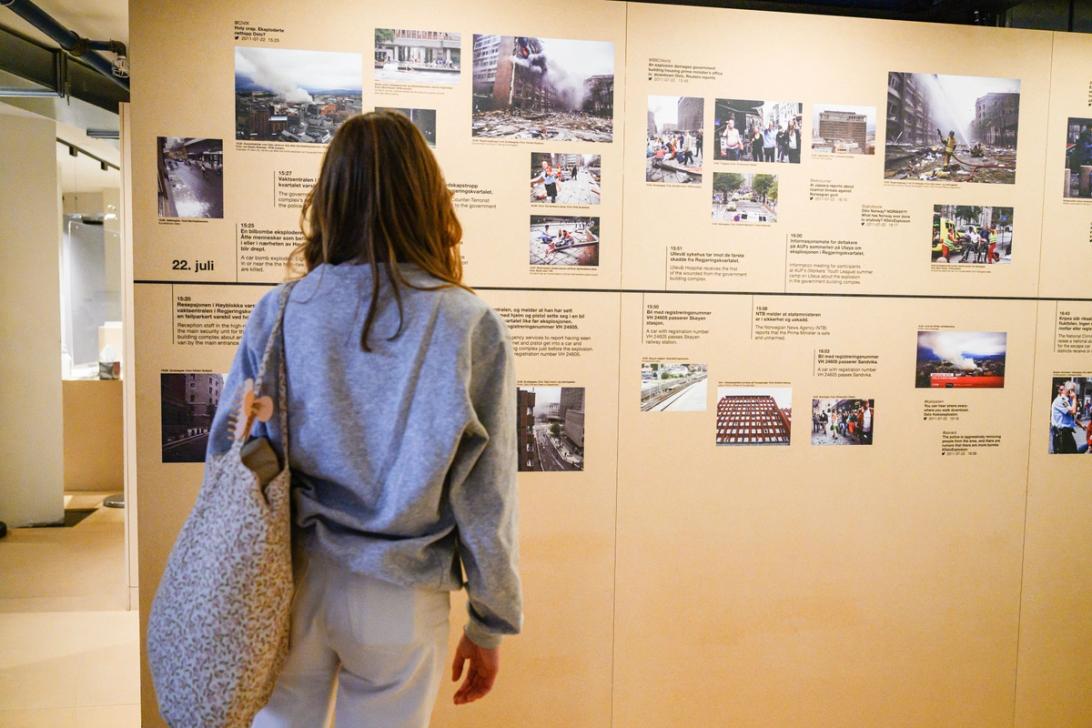 Visitor looking at the timeline in the Centre.

The Government Quarter and 22 July

We often see that the Government Quarter is left out when the story of 22 July is communicated in various contexts. A possible consequence of this frequent omission of the Government Quarter from the teaching of history is that this part of the attack may disappear from our collective consciousness some time in the future. It is important to include the events in the Government Quarter for several reasons. Eight people lost their lives there, many more were severely injured, and many continue to struggle with mental traumas. In addition, it is important to highlight that this terrorist target (the Prime Minister’s office and bureaucrats in the service of democracy) is strongly symbolic and reveals key aspects of the terrorist’s ideology.

We assume that many of you are considering using films in your teaching. You may well do so, but it is important to consider some aspects in advance. First, why do you want to show a film? You need to think through what you want to achieve with this. A film will also need to be contextualised. You need to help pupils understand what a film can and cannot tell us about a historical event.

For example, many choose to show ‘Utøya – 22. juli’. It focuses only on Utøya, not on the Government Quarter. It thereby fails to address all causes and consequences of the terrorist attack. On the other hand, many eyewitnesses point out that in their experience, this film gives a more realistic portrayal than other screen versions of the terrorist attack at Utøya. The Netflix film directed by Paul Greengrass is another example. It was made for an international audience and addresses many topics related to 22 July and its aftermath. The film is based on the novel ‘One of Us’ by Åsne Seierstad, and the dialogues in the film are constructed on the basis of this book. However, it describes little of the background for the attack and the terrorist’s ideology.

When using films, it could be useful to show excerpts from several films or series about 22 July to highlight what information they can and cannot provide about the terrorist attack. Films are a good source of information and a useful element in the teaching, but not as the sole element. After showing films, you should ask follow-up questions or introduce other teaching material from our website. 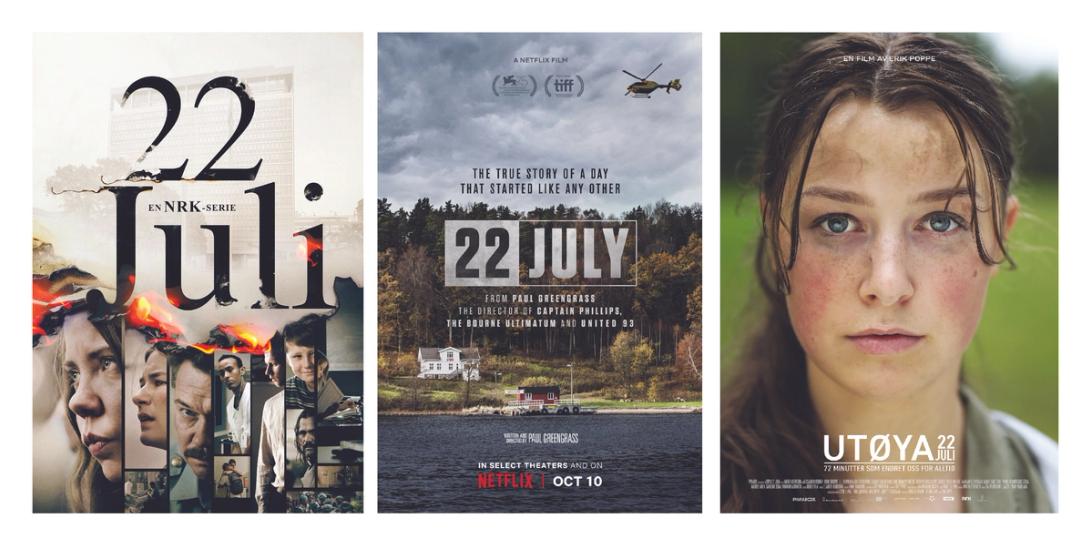 Film and series posters about 22 July.